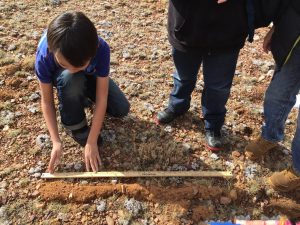 The Education Trust is providing leadership in the establishment of a Pebble Plain Ecological Reserve in Moonridge.  They continue to protect this reserve through collaboration with the members of the Pebble Plain Committee.  This collaboration allows educating about the unique environmental occurrence called the Pebble Plain Ecosystem.  This geologic formation only occurs in Big Bear and Holcomb Valley and nowhere else in the world.  As a result, the flora and fauna growing on the Pebble Plain is also unique to these areas.  Interested groups have joined together to insure that these plants and insects will be forever protected.  The future vision for the reserve includes a boardwalk over the plains, and interpretative trails for the enjoyment of Big Bear Valley residents and visitors.  An environmental protection master plan and a restoration plan are currently under development. 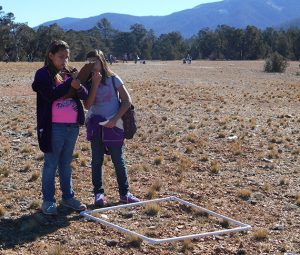 The Big Bear Valley Education Trust is providing the leadership for continuing development of place based educational opportunities such as:

Big Bear Valley Education Trust provides children, community members and visitors the opportunity to engage in the study and stewardship of endemic plant and insect species found only in Big Bear Valley and Holcomb Valley.

If you believe in our mission and goals, please sign up to volunteer or press the “Donate Button” at the top of the page.

Get involved and Volunteer

Big Bear Valley lies at the northeast end of the San Bernardino Mountains at an elevation of about 6,750 feet, surrounded by peaks of 7,000 to 10,000 feet. To the north and east the mountains drop abruptly to the Mojave Desert, yet just ten miles to the south looms Mt. San Gorgonio, the tallest peak in southern California at 11,502 feet.

During the Ice Age, some 18,000 to 20,000 years ago, Mt. San Gorgonio was the southernmost peak on the Pacific Coast to have glaciers. It was an ice-bound island. At that time the Big Bear area was covered by a large lake and around its treeless shores grew tufted, little alpine plants much like what one might find on Sierran peaks further to the north today.

As the climate became warmer and drier during the xerothermic period, about 8,000 to 10,000 years ago, the Mojave Desert expanded to the west, cutting off the San Bernardino Mountains from the Sierra Nevada by an arid expanse of over one hundred miles. END_OF_DOCUMENT_TOKEN_TO_BE_REPLACED